Majestico was born from the breath of a new America, a land at the end of reason, where dogma meets God. At the beginning, he found himself living in a bungalow behind the local zoo. Amid the sounds of monkeys and elephants, he began recording what would be his first record “Boundary Conditions”. It was released into that great void they call the Inter-Net and although it remains undiscovered by the outside world, it was received with much excitement among peers.

Majestico then moved to Little Biv Town and made a bed in the studio there. Attempts were made at new recordings but the project was plagued with technical problems, personal disputes, and money was scarce. But late that summer, there was a breakthrough. A show was planned to be held in the studio so Majestico gathered a band to perform. That night people poured into the room as a cloud of steam formed above. While he played, they danced. This was all new to him, and although recording had been stunted, a new vision was realized. He just wanted to rock. Marked by this new freedom, Majestico continued to write songs and play everywhere that was cool; bars, clubs, houses, warehouses…wherever. Then Jeffery Drag Records approached him to record a 7". He agreed and took the band to Battletapes to record the "Love is God" EP. It was released in 2012. This brought him to the doorstep of producer Andrija Tokic and Bomb Shelter Studios, where his friends the Alabama Shakes had recorded their album. This time, recording was a sinch. The music fell onto the tape and the album “When Kingdom Come” materialized. A new saga has been formed in Nashville, Tennessee and the future has no bounds.

Editor’s Note: Majestico is currently surfing your airwaves. He’s cruising a tram ride on the milky-way highway searching for the key to life, He’s totally cool, laid back, and humble. He doesn’t believe in slaughtering wheat or vegetables just to eat them. That’s wrong, but if you disagree he respects your opinion because freedom is the price we pay to get to blow stuff up with hand grenades and bazookas.

Think T. Rex or New York Dolls mixed with the heavier or psyched-out moments of The Black Lips. It is the kind of music that makes you want to pound some drinks and shake your ass in a dark dive bar."   -My Old Kentucky Blog

"Psych-rock appeal that will find favor with fans of Brian Jonestown Massacre, and, it seems Brittany Howard from Alabama Shakes, who brought him on tour."   -Noisey Music/Vice

"Thrilled to have MAJESTICO in Nashville."  -The Tennessean

"Rewarded the crowd with music that fell somewhere between Velvet Underground, Rolling Stones, and The Stooges. A young Mick Jagger."   -Charleston Grit 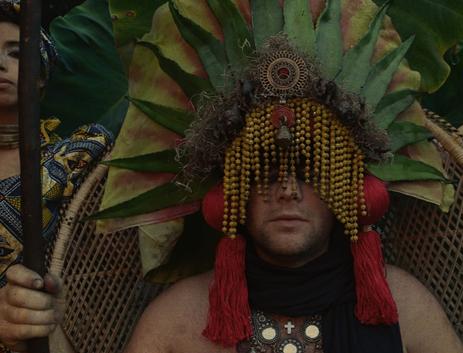